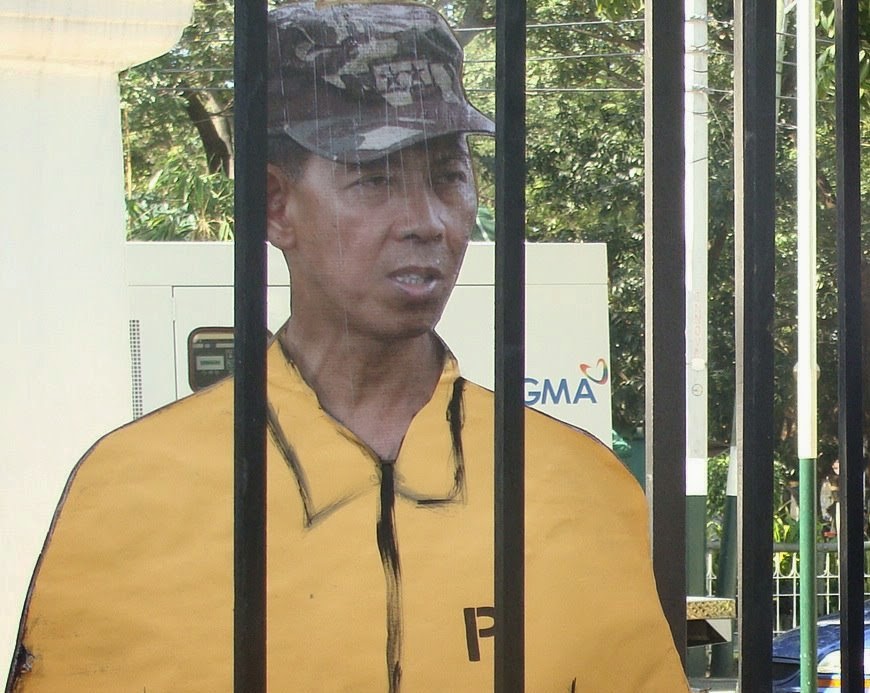 The arrest, lawyers said, automatically gives the court jurisdiction on Palparan and the charges filed against him. But as of press time, no commitment order has been issued by the Regional Trial Court Branch 14 here as they await until the retired general is presented physically by the National Bureau of Investigation (NBI).

As this developed, Palparan is expected to be arraigned on August 18 when the trial for kidnapping of two University of the Philippines (UP) students resume. “Retired Maj. Gen. Jovito Palparan is now within the reach of the law and hopefully, Lady Justice with the sword and the scales,” said Lawyer Edre Olalia of the National Union of People’s Lawyer (NUPL) yesterday.

Olalia also serves as counsel for the parents of Sherilyn Cadapan and Karen Empeno, two UP students abducted on the night of June 26, 2006 in Barangay San Miguel in Hagonoy town. According to Olalia, Palparan’s arrest is never too late for justice to catch up.

He said that on August 18, defense counsels for Lt. Col. Felipe Anotado and Staff Sargeant Edgardo Osorio will prepare to wrap their case, but the trial for Palparan will only begin.“What happens thereafter will come under close scrutiny, here and abroad.

Palparan must face the music and the full wrath of the furies for all the crimes credibly imputed to him - extrajudicial killings, enforced disappearances, torture, arbitrary arrests and other gross human rights violations, all done without compunction and aggravated by his signature braggadocio,” Olalia said.
Olalia also said that based on law, Palparan should be detained at the Bulacan Provincial Jail due to its proximity to the court. He said that no special treatment should be given to the retired general. In the past, the court issued the same ruling on Anotado and Osorio, but they were transferred to when their lawyer argued for the safety of the accused military officers.

For his part, Father Rolando De Leon called for quick trial against the retired general in order to hold him accountable. A member of the militant organization in the province, Father De Leon received three M-16 bullets in early 2006 when Palparan was the commanding general of the dreaded 7th Infantry Division of the Army based in Nueva Ecija.

De had just completed the Mass and his staff were counting the offering from collection baskets when they found the three M-16 bullets. Meanwhile, Lawyer Jesus Santos of Marilao town remained silent until press time yesterday.

This writer tried to contact by calling and sending text message to his cellular phone in an attempt to confirm if he will represent the general. Known for his close personal and professional relations with former First Gentleman Miguel Arroyo, tried to represent Palparan in court in 2012 but the court said they still have no jurisdiction on the general then.

Along with Anotado and Osorio who have been in military custody, Palparan has been accused of kidnapping and illegal detention on the two missing UP students. The other accused is Master Sargeant Rizal Hilario who is said to be the right hand man of Palparan who has been labeled by militant groups as “The Butcher.” Dino Balabo
Posted by Unknown at 6:49 AM