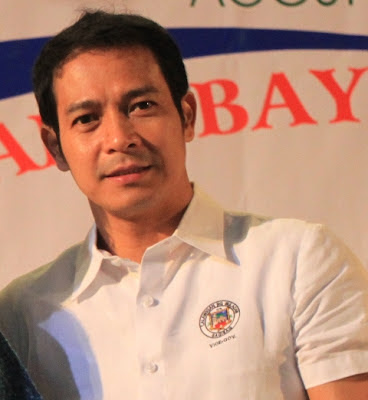 MALOLOS CITY—It is now official, reelected Bulacan Vice Governor Daniel Fernando earned the highest vote of a local candidate in a single election in the history of the province.

As this developed, four other celebrity-turned politicians in the province lost in the 2013 polls including comedian Long Mejia, actor Alex Castro, and singers Imelda Papin and Rey Valera.

Lawyer Elmo Duque, provincial election supervisor of Bulacan said that the actor turned politician is voted by more than half of the 1,497,873 registered voters in the province.

Fernando’s certificate of canvass and proclamation showed that he received a total of 853,558 votes in the May 13 polls.

The said number is higher than the more than 800,000 earned by reelected Governor Wilhelmino Alvarado who ran unopposed, while Fernando battled two other candidates.

Duque said that Fernando’s votes earned is the highest in the history of Bulacan.

When asked if it is the highest number of votes earned by a local candidate in a single election all of Luzon, Duque said, “I could only speak for this province” referring to Bulacan.

Records showed that that Fernando’s recent votes earned is higher than the more than 535,000 votes in the 2010 elections when he first won as vice governor of Bulacan.

In an interview after his proclamation on Wednesday night, Fernando described the number of votes he earned as “tsamba lang.”

With regards to fellow actors and celebrities who lost in the May 13 elections in Bulacan, the reelected vice governor advised them not to give up. 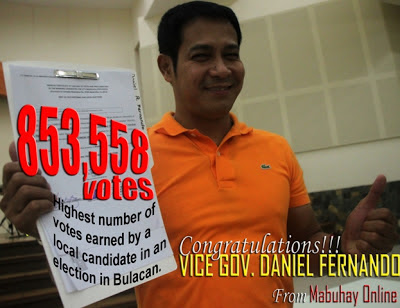 Fernando was referring to actor Alex Castro and singer Rey Valera, who both lost in the separate bids for the vice mayoral post in Marilao town and Meycauayan City.

Other celebrities in the province who lost are singer Imelda Papin who lost he bid for the lone congressional district of the City of San Jose Del Monte; and comedian Long Mejia who for the second time lost his bid to become a municipal councilor of Calumpit town.

Records showed that Fernando’s first attempt in politics was in 1998 when he ran lost as an independent vice mayor in his hometown of Guiguinto.

He did not stop there, in 2001 and 2004 elections, he ran for the provincial Board Member position and won, even earning him the title as a senior board member of Bulacan.

In 2007, he ran for vice governor and lost to then Congressman Wilhelmino Alvarado; but in 2010, Alvarado took Fernando as running mate and both of them won.

Prior to his entry into mainstream politics, Fernando was appointed as Sangguniang Kabataan chairman in Barangay Tabang,Guiguinto in the early 80s, then pursued a career in acting by joining theater groups.

In the mid-80s, he starred in the now classic film “Scorpio Nights 1.”  Dino Balabo
Posted by Unknown at 11:58 AM No comments: