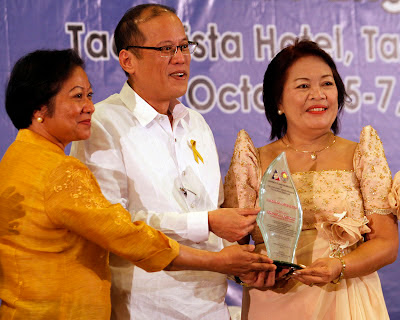 For the first time in its history and in celebration of its 25th year since reactivation, the Philippine Press Institute (PPI) will have President Benigno S. Aquino III and Ombudsman Conchita Carpio-Morales as keynote speakers during its 2-day by-invitation only 16th National Press Forum on April 23-24 at the Traders Hotel Manila.

This also marks the 48th founding year of the Institute since 1964.  It was rendered moribund during martial law, re-activated after the People Power Revolution, and incorporated in 1987.

President Aquino will be the first head of state to address the only annual gathering of owners, publishers and editors from Luzon, Visayas and , representing 72 publications.

The President is expected to deliver a message on the “protection and preservation of press freedom and democracy” in the opening ceremonies on April 23.  Justice Conchita Carpio-Morales will keynote the Community Press Awards, honoring the best civic journalism reportage of the previous year.

Justice Carpio-Morales administered the oath of office to President Aquino on June 30, 2010, the first female magistrate to do so.  The PPI Board was inducted by the President on October 3, 2011 in Malacañan.

The National Press Forum is the only conference of its kind when the collective leadership of the nation’s influential publications convene in to discuss matters concerning the industry and issues affecting the professional and ethical practice of journalism.
This year’s conference theme “Media Accountability and Public Engagement” will serve as opportunity for the media to assess itself since the restoration of democracy over 25 years ago.  Attendant issues to be discussed will be the Asian Media Barometer: The Philippine Study, media self-regulation and the safety and welfare of journalists.

Since 2009, the annual National Press Forum, one of the most-anticipated print media events, is being consistently supported by The Coca-Cola Export Corporation (TCCEC) under its long-term project on “Building Better Communities Through Civic Journalism” which started in 2002 with training programs.

The Philippine Press Institute is the national association of newspapers.  Its principal mandate is to protect press freedom and continuously professionalize newspapers via seminars, workshop, forums and strategic partnerships with other media organizations.  It also collaborates with corporate supporters for the conduct of these activities.
Posted by Unknown at 2:42 PM No comments:

Researchers from University of the are studying marine microorganisms in sponges that may lead to the discovery of new drugs for tuberculosis, pneumonia and other infectious diseases, and snails that could provide anti-pain agents.

Led by UP’s Vice President for Academic Affairs Dr. Gisela P. Concepcion, researchers from the UP Marine Science Institute (MSI) have isolated microorganisms associated with sponges and are currently confirming their anti-infective  properties or ability to combat infections. This is part of the program called Pharmaseas Marine Drug Development Program which was funded by Department of Science and Technology--Philippine Council for Marine and Aquatic Resources Research and Development (PCMARRD) which is now Philippine Council for Agriculture Aquatic Resources Research and Development (PCAARRD).

Also part of the Pharmaseas program is the discovery of anti-pain drugs from the venom of turrid snails. Anti-pain drugs are important in the management of cancer and other debilitating illnesses.

Sponges, the oldest multi cellular animals, are regarded as the “most successful organisms.” They are physically defenseless, soft-bodied and sedentary making them easy prey, yet they have survived millions of years. According to experts, their survival rests on their ability to produce different kinds of bioactive compounds to protect themselves.  Scientists recently have discovered that microorganisms in the tissues of sponges produce some of these compounds.

The emergence of drug-resistant pathogens or microorganisms that cause diseases has propelled the need to produce new drugs.  The researchers from MSI have isolated compounds that could be used to produce new drugs to combine with existing antibiotics. Combination therapy is the thrust nowadays to combat drug-resistant pathogens, according to Dr. Concepcion.

The researchers have isolated and characterized several peptides, in which molecules are formed by joining two or more amino acids or building blocks of proteins, from the venoms of turrid snails that were collected from the rich marine diversity of the .

Aside from the two main projects of Pharmaseas which entail isolating, purifying and characterizing compounds from marine microorganisms and venoms of turrid snails for drug discovery, there are three other support projects under the program.

The first support project, MMO’s and Turrids: Collection, Ecology, Biology, and Bioinformatics, successfully gathered data for the program and this database website can now be accessed through the UP local network.

The researchers were also able to do optimization studies for the culture of bioactive compounds through another support project “Marine Microorganisms: Characterization and Culture Optimization.”  Culture optimization will let the researchers culture the microorganisms in the laboratory so that they do not have to keep collecting the sponges thereby preserving marine biodiversity.

The researchers of the last support project, Marine Microorganisms and Turrids: Genetics, Molecular Phylogeny and Gene Expression, are classifying the organisms and the turrids according to their genetic markers or specific genes that produce a recognizable trait and can be used in family or population studies.  The group is leading the classification of turrids which are at least 12,000 species worldwide 5,000 of which can be found in the .

The Pharmaseas program has so far achieved its objectives, but Dr. Gisela admits that the roll out of drugs based on their research will come in later.

“It is unrealistic to say that we can roll it out in five years. But if nobody is going to start now with the biodiversity that is right beside us, who is going to provide this 15 years from now?”  Dr. Concepcion said.

The average time for research and development for new drugs is around 15 years.

Dr. Concepcion and her team are now preparing the terminal report for the Pharmaseas program.  They have submitted a phase two proposal to continue its initial achievements.
Posted by Unknown at 5:44 AM No comments: