MALOLOS CITY—How smart is the signage that you’re using now?

This is the main question answered by a German national four months after the onslaught of Typhoon Yolanda in Eastern Visayas where his family was trapped last year.

Thomas Wallraf, 50, a German national said current technologies involving Light Emitting Diode (LED) is not as smart as many though it to be. However, he is introducing a smarter technology that will improve the functionality of LED signages.

It is called the intelligent LED where information that is flashed on LED display can be changed anytime remotely. “Even if I am in Davao City and the LED display is here, I can change the message anytime,” he said noting that the LED display he is now introducing is equipped with a GSM modem connected to a cellular phone.

Wallraf disclosed that he came up with the idea after the onslaught of Typhoon Yolanda in Eastern Visayas last year. He said that it took him almost a week before getting in touch with his family. “When I finally reached Tacloban City, I saw disorder due to lack of proper information,” he said noting that people do not know what to do.

He said hundreds of military personnel spent a lot of time in trying to control long queues and telling people what to do. 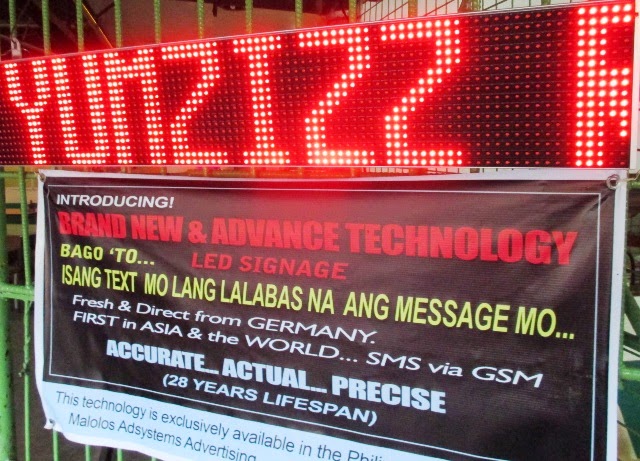 “They could have saved time and effort if they have the intelligent LED technology at that time,” he said adding that he personally asked his friends in Germany to come up with a new software in the utilization of LED display.

Wallraf said GS Electronics based in Leverkussen, Germany responded within months and came up with the intelligent LED display. He said the LED technology has been around for more than two decades, but it is usually connected to a computer or a laptop.

“Now, we don’t need a laptop computer to feed in messages on intelligent LED, we only need a cellular phone,” he said. Aside from disaster hit areas, Wallraf said his LED technology can be used to alert people days before disasters.

He said it can be installed in front of churches, public markets and places frequented by many people who can easily read the messages that are displayed. He said the messages can be changed remotely as often as an operator want.

It can also be installed along the highways or on board a pickup truck or any large vehicle. The cost for Wallraf’s intelligent LED technology starts at P55,000 per package that includes a meter long and 16 centimeters high display.

He said any customer can order a larger display but it will cost more. Walraff said their display can show 16 running characters at a time, and have a capacity of 160 characters per message. Dino Balabo
Posted by Unknown at 9:51 PM No comments:

The victim survived the attack, but it was enough to raise alarm bells for residents here due to series of crimes since December when a family was massacred, followed by a killing of retired teacher and a police officer last January.

Initial investigation disclosed that Cervantes was on board a Sym motorcycle with license plates 8913-RP and was on the way to her family house at Long Valley Subdivision in Barangay San Isidro 2, Paombong, Bulacan  when she was shot in the head around 7:30 Tuesday night.

Some even said that they heard at least six gun fires.

The suspect immediate fled to unknown direction, while bystanders came to rescue the former beauty queen.

She was rushed to the Divine Word Hospital at Barangay San Pablo here for first air treatment and was transferred to Bulacan Medical Center, then to University of Santo Tomas Hospital in Manila.

This was echoed by Sol Santos, a village councilor who said that she was told that Cervantes suffered gunshot wounds in the neck, in the head and on her back.

The vice mayor also said that despite head injury, Cervantes is still conscious when rushed to Divine Word Hospital.  Dino Balabo
Posted by Unknown at 9:07 PM No comments: