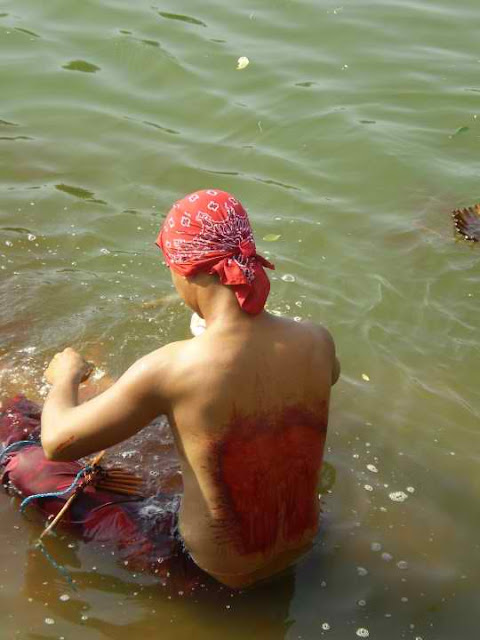 This is due to pollution on Bulacan rivers in Marilao, Meycauayan,Bocaue, Balagtas, Guiguinto which were declared as biologicall dead by the Department of Environment and Natural Resources (DENR), and the Angat River.

As head of the Provincial Public Health office, Dr. Jocelyn Gomez told the STAR that bathing on rivers is not advisable especially for flagellants who have open wounds on their back.

Gomez cited the possibility of infection due to a number of unidentified pollutants in the province’s river systems.

The was echoed by Dr. Roberto Ramirez of Bulakan who noted the possibility of getting infected by tetanus.

As a medical practitioner, Ramirez insisted that it is safer for flagellants to wash their wounds with soap and clean water.

However, many Bulakenyo flagellants are unwilling to heed doctors advise.

They noted that older flagellants used to wash and bathe on local rivers in the past.

However, the quality of water on local river systems has dramatically change in the last more than 20 years. 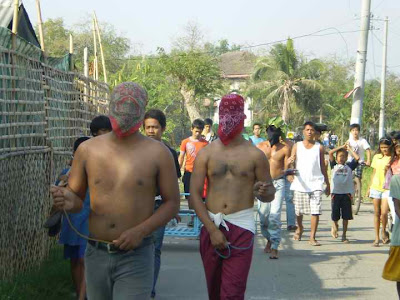 Back then local water flowing on local rivers were clear and clean, and rivers are teeming with fish and other marine life.

Today, local rivers in the province are polluted with solid waste not to mention effluents coming from factories and households.

This situation were affirmed by Governor Wilhelmino Alvarado and Vice-Governor Daniel Fernando.

In an earlier interview, Alvarado lamented that water in rivers in the province turned brown in the last 10 years.

He said that it was due to pollution brought by increasing population.

The same was echoed by Fernando who said that if rivers in the past were teeming with fish,it is now teeming with garbage.

He also lamented the damage brought by undisciplined garbage disposal on local rivers that turned it into garbage dump.  Dino Balabo
Posted by Unknown at 9:42 AM No comments:

MALOLOS CITY—The Diocese of Malolos reiterated its stand against self flagellation during the observance of the Holy week.

This came as the Church listed pilgrimage sites in Bulacan which exclude three prominent places in the province visited by thousands of devotes.

Excluded from the list if pilgrimage sites in the province are Grotto Vista in San Jose Del Monte City, old Santisima Trinidad Church in this city and the Barangay Kapitangan in Paombong town where devotees reenact the crucifixion of Jesus Christ every good Friday.

Arvin Ray Jimenez of the Commission on Social Communications of the Diocese of Malolos said that all three places have problems.

He said that Grotto Vista which draws thousands due to life size statue is no longer under the management of the diocese along with Santisima Church.

Jimenez said that pilgrims can instead visit the National Shrine of Divine Mercy in Marilao town which is adjacent to San Jose Del Monte City. 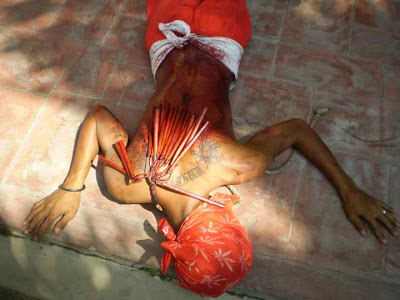 As another alternative, the diocese is advising pilgrims to participate in liturgical celebrations in different churches in the province.

The diocese also advised pilgrims to join in the annual Visita Iglesia, not only to see century old churches but to pray.

Among the churches that they advise for Visita Iglesia are the St. John the  Baptist Church in Calumpit, National Shrine of St. Anne in Hagonoy, National Shrine of Divine Mercy in Marilao, Basilica Minore here, St. James the Apostle Church in Plaridel, St. Augustine Church in Baliwag, and Sacred Heart of Jesus parish in San Rafael town.

Another place to visit for the Holy week is the Immaculate Conception Seminary (ICS) in barangay Tabe, Guiguinto town.

Jimenez said that  starting last Sunday, seminarians at ICS have starting the daily reading of the passion of Christ or Pasyong Mahal ni HesuKristo, which will be followed by seminars about holy week and nightly vigils.

On Maundy Thursday and Good Friday, there will be a celebration for the station aod the cross and the seven last words of Jesus Christ.

With regards to annual staging of cenaculo or community theater depicting the life of Jesus Christ, the diocese of Malolos encouraged Bulakenyo to watch.

However, they noted that watching cenaculo is not only for entertainment purposes but for meditation on the life of Christ. 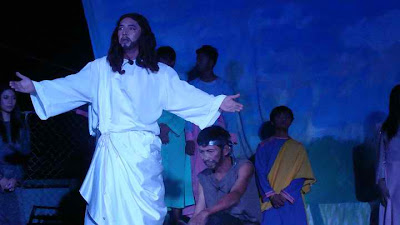 For about a century now, cenaculos are being staged annually in Barangays San Sebastian in Hagonoy, Caingin and Tikay in Malolos City.

There are also other theater groups like the Dularawang Bulacan Foundation and the Barasoain Kalinangan Foundation that stages cenaculos during the Holy week in Bulacan.

Posted by Unknown at 9:33 AM No comments: