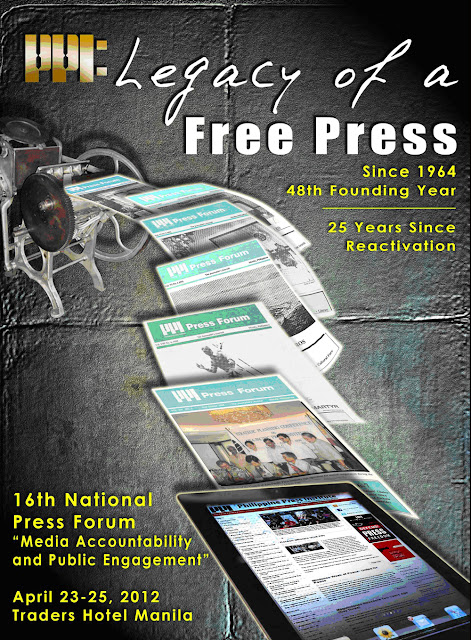 Maria Bundoc-Ocampo could no longer remember how many times she cried and considered stopping the publication of Punla, a weekly newspaper she established in Bulacan in 1984.

She was short on budget and staff, and was then raising a young family with her husband Obet.

But Bundoc-Ocampo went on. Her salary then, as Filipino editor of the Philippine News Agency (PNA) and later, of a daily tabloid, was halved between her family and her ‘professional opium’ called newspapering.

Today, Punla is one of the 70 strong member-newspapers of the Philippine Press Institute (PPI), the national association of newspapers — many of which started or are still operating on a shoestring budget.

The Institute was established in 1964 by publishers of the biggest newspapers in the country who refused to be known as an “old boys club,” by addressing industry concerns.

The imposition of Martial Law in 1972 rendered the Institute moribund until July 3, 1986 when the reconstituted Board of Governors met for the first time. The following year the PPI was incorporated under Philippine laws.

In the years that followed the Institute’s membership, training programs and advocacies have remarkably expanded. While major Manila-based newspapers like The Philippine Star, Manila Standard Today, Philippine Daily Inquirer, Philippine Journal, Malaya Business Insight, and BusinessWorld were represented in the Board, regional trustees representing smaller newspapers in province were also elected.

To some, the composition of the Institute’s Board appears to be another illustration of ‘imperial ’. But said big Manila-based newspapers are actually helping the smaller newspapers based in provinces, knowing that success of community journalists is their success as well.

In the words of the late PPI Executive Director and Mabuhay publisher Jose L. Pavia, the idea of big newspapers helping community newspapers through provision of cash prizes during the annual Civic Journalism Community Press Awards is an incarnation of the biblical words “brother’s keeper”.

Indeed, the Institute continues to serve as brother’s keeper, not only through the annual awards that recognize excellence in journalism, but by conducting educational training programs aimed at improving skills of journalists of its member-publications and through advocacies that seek to protect rights and freedoms of journalists.

“I wished we joined PPI when I was first invited by Alice (Villadolid) in 1997. I missed a lot of training,” said Bundoc-Ocampo whose newspaper Punla became a member of the Institute in 2010.

As publisher of one of the newest member-publications of the Institute, Bundoc-Ocampo cited the sincerity of its members to help others.

“They are really sincere in the sense that they share new ways in improving the quality of publication and its business aspect,” she said.

The same is true with Punto Central Luzon, a member-newspaper based in Pampanga which joined the Institute in 2008, and became a finalist in the annual awards the following year.

“The people behind PPI are the ones that mentored us,” Joselito Aguilar, editor-in-chief of Punto said. He considered Jose L. Pavia, the Institute’s former executive director, and late publisher and editor-in-chief of Mabuhay based in Bulacan, as one of his biggest inspirations in the business.

As participant to seminars and workshops conducted by the Institute since 2004, Aguilar said that the Institute inculcated in him and other journalists that newspapers also serve as a catalysts for community action.

As matter of fact, Punto got the distinction as one of the contemporary newspapers in Pampanga that challenged the powers-that-be.

Aguilar challenged the leadership of Oscar Rodriguez, the city mayor of , Pampanga after he was proclaimed “World Class Mayor” by the in Asia (ISA) for his performance-based governance system.

Last year, when other newspapers in Pampanga bannered on their front pages that there was no open dumpsite in the city, Punto went out of its way by photographing the same headline in front of the city’s open dumpsite. The same photograph landed on the front page of Punto the next day, to the consternation of the mayor.

But Aguilar and Punto did not stop there. They carried on and realized that by speaking the truth, they would earn the respect and become more credible to their readers.

Citing lessons he learned from media programs he attended, Aguilar said, “PPI makes it a point that newspapers should perform the role of watchdogs and not to sleep with people they watch.”

For its part, ’s Mabuhay has been serving as a catalyst and forum for community action in Bulacan.

Last year, Mabuhay exposed an open dump just behind the in which has been the subject of complaints of hundreds of Bulacan State University (BSU) students for over three years as its stench and smoke permeated their nearby classrooms, thus hindering their classes.

Since Mabuhay solicited comments from the new provincial administration on how it intended to rehabilitate the open dump, before the story and photograph of said dumpsite were published by Mabuhay, the government had already started rehabilitating it and contacting licensed medical wastes hauler and processor.

In the final days of January, Mabuhay also went out of its way and started documenting unrepaired light stations on the coast of Bulacan fronting the . By first week of February, a story package with photographs of the light stations was published, which again alerted the provincial government.

On July 13, the Regional Development Council (RDC) of Central Luzon approved a resolution for the rehabilitation and construction of additional light stations on the coast of Bulacan, Pampanga and .

While Mabuhay became instrumental for the impending eventual repair and construction of additional light stations, it gave credit to the social media activism of residents of the coastal villages of Bulacan.

Like other member newspapers, Mabuhay also gives credit to the series of training programs conducted by the Institute through the years as they not only improved skills of journalists, but encouraged excellence in the professional and ethical practice of journalism through the annual Civic Journalism Community Press Awards supported by the major Manila-based member-newspapers and THE COCA-COLA EXPORT CORPORATION (TCCEC).

The same was echoed by Dalmacio Grafil, publisher-owner of three Visayas-based newspapers namely, Leyte Samar Daily Express, Samar Weekly Express, and Eastern Samar Bulletin, which are all members of the Institute.

“It really encourages us to pursue excellence in the practice of journalism,” Grafil said in a telephone interview, referring to the annual awards.

As owner of three different newspapers, he said that he has no regrets in joining the Institute, saying it helped them a lot.

For her part, Elnora Cueto of the Lucena Herald said, they decided to be part of the Institute due to its long standing reputation of excellence and credibility.

In , Fr. Jonathan Domingo, OMI, chief executive officer of Mindanao Cross, a 63-year old newspaper published by the Catholic Church, said in a telephone interview that issues addressed by the Institute continue to evolve.

He said that while its training program on civic journalism was successful, the Institute must also consider expanding it to peace journalism, a special concern in .

And as technology continues to grow, younger journalists of PPI member-publications in started advocating THE utilization of the new media or the internet including the social networking sites as means of disseminating news and information.

The Institute showed receptiveness to it as its Luzon group included it in its training program for students from northern and during the two previous annual National Press Forums.

Indeed, the Institute is celebrating its 48th founding year and 25th year since its reactivation in 1987. But it doesn’t mean it is old.

Truth is, the Institute is young. It sort of just entered its adulthood, but it has accomplished more than its age, which prepared it to the challenges of the times.

The article is the author’s special contribution to the theme “PPI: Legacy of a Free Press” which is the unifying theme for the Institute’s celebration of its 48 years of founding and 25 years since reactivation, in April 2012.
Posted by Unknown at 7:32 AM No comments: