Months after summons have been issued by a Quezon City Regional Trial Court, several respondent military personnel and police officers in the P15-million damage suit filed by the Morong 43 health workers remained officially unnotified of the charges. The National Union of People's Lawyers (NUPL), counsel for the complainants, asked the Philippine National Police (PNP) and Brig. Gen. Herbert Yambing of the Office of the Provost Marshall General of the Armed Forces of the Philippines (AFP) to locate and provide information on the “missing” respondents but to no avail.

“This is tantamount to a cover-up of the military and the police for their peers whose accountability is being sought for their involvement in brazenly violating the rights of the Morong 43 health workers,” said the NUPL through its Assistant Secretary for Legal Services Atty. Ephraim Cortez.

“With their cynical unwillingness to cooperate, state forces have put up another roadblock to justice that effectively frustrates efforts to seek accountability for human rights violations against the Morong 43 health workers,” said Cortez.

In a letter sent to the NUPL, Yambing declined to give information on the whereabouts of the military personnel purportedly because his office has “no direct knowledge” on the whereabouts of the military officers and that he supposedly has no authority to release such information. On the other hand, the PNP, through Records Management Division Chief Manuel Gaerlan, CEO VI, said in its reply that the names of P/Supt. Balolong and P/Supt. Nubleza, who have been publicly known to be part of the service, strangely do not appear in the roster of the PNP.

“Either they are  deliberately  hiding any information about those involved or they are giving us a run-around through technicalities in  disclosing very simple standard details about their personnel for the purpose of serving summons, or both” Atty. Cortez said.

The summons to the respondents in what is considered the first civil case for human rights violations against former President Gloria Arroyo and her security forces were issued last November 28, 2011. The Morong 43 health workers were illegally arrested in Morong, Rizal on February 2010. They were illegally arrested, detained, and tortured on the baseless charges of being members of the New People’s Army (NPA). Against all odds, they had filed the countersuit way back in April 2011.

“This obstructionist attitude demonstrates the manifest bias of the military and the police in favour of those from their ranks who commit rights violations,” Atty. Cortez said.

“And it  shows once again how hard and sometimes frustrating it is to pursue justice for human rights violations under the present legal and judicial system  and how impunity is perpetrated before, during and after a violation,” NUPL Secretary General Atty.  Edre U. Olalia added. “But we shall not let up. They cannot just get away with it just like that.”#
Posted by Unknown at 8:24 AM No comments: 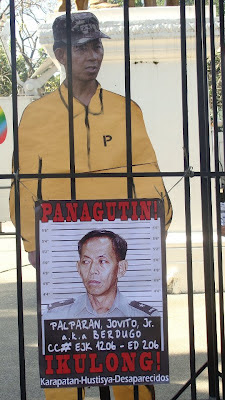 The International Association of Democratic Lawyers (IADL), a non-governmental organization founded in 1947 that has consultative status with the United Nations (UN) Economic and Social Council (ECOSOC) and accredited with the UN Human Rights Council, has called on the Philippine government to use all its powers, resources and machinery in immediately arresting retired Maj. Gen. Jovito Palparan Jr. who has gone into hiding for three months now.

Gen. Palparan has been indicted for the enforced disappearance of two young activist students Sherilyn Cadapan and Karen Empeno who were forcibly abducted, brutally tortured, and repeatedly raped in 2006. He faces a string of other pending and potential suits for his involvement in hundreds of extrajudicial killings, disappearances, torture and other violations when he was in active service during the time of former President Gloria Arroyo.

In the recently concluded meeting of its governing Bureau in Brussels, Belgium over the weekend, the IADL approved by consensus and in principle an omnibus resolution challenging the administration of President Benigno Aquino III to leave no stone unturned to immediately arrest Gen. Palparan and prosecute him forthwith, noting that he is reportedly the highest-ranking military official that has ever been criminally indicted for human rights violations after the Marcos dictatorship.

The IADL resolution said that violators of human rights anywhere in the world, wherever they are, must answer for their crimes against humanity. The IADL emphatically stressed that targeting of civilians violates the 1949 Geneva Conventions and the 1966 International Covenant on Civil and Political Rights (ICCPR). It underscored that those who violate these laws must be held accountable.

The IADL, which reputedly has members in 90 countries, asked its country affiliates to blast the information about Gen. Palparan and to closely monitor the case/s against him even as it twitted Pres. Aquino for striking a distant and uncaring pose about pressing social and economic issues.

The IADL, headed by its President Jeanne Mirer from the New York-based National Lawyers Guild (NLG) that has thousands of members in all the states of the US, noted that there continues a bubble of impunity even under the present government. It expressed concern that serious and credible reports of killings, disappearances, torture, urban poor demolitions and other human rights violations continue; that the government has by and large not undertaken clear, strong, concrete and effective steps to make perpetrators accountable; and that political prisoners still unjustly languish in jail.

The IADL said that unless perpetrators are punished and held accountable for their actions, the violations will continue with impunity. It pointed out that unless positive and concrete actions are taken by the government to improve the dire human rights situation, there will be more victims and the likes of Gen. Palparan will continue to sow terror.

Consistent with its various campaigns to work for the release of political prisoners all over the world, the IADL also joined appeals that the more than 300 political prisoners be immediately released through a general, unconditional and omnibus amnesty or through any other mutually acceptable mode of release.

The Bureau was also informed how the legal and judicial system in the Philippines has perpetrated the injustice against these prisoners through the filing of false or wrong charges – a practice that is also incompatible with international human rights law and international criminal law principles- ,  the improvident use of generic names to persecute branded “enemies of the state,” and the infectiveness or impracticability of existing local legal remedies.

The IADL agreed that if the Aquino government is really serious and sincere in its commitment to improve the Philippine human rights situation, the release of political prisoners is only proper and an imperative as a matter of law, principle and justice.

The IADL also resolved to ask the Philippine and US governments to stop US intervention in the country through deceptive and unequal visiting forces agreements or arrangements and is expressed alarmed at talks to expand the presence of US troops, facilities and materiel. It pointed out that this is contrary to the general principles in international law, particularly on national sovereignty and the right of peoples to self-determination.

The IADL has consistently opposed and campaigned against any kind of foreign intervention in any country including economic, political, and military interference. It lamented that US troops remain in the despite the historic struggle and laudable victory in kicking out in the 1990s the two largest military bases outside the mainland.

Finally, the IADL resolution called on the Philippine government and the liberation movement National Democratic Front of the Philippines (NDFP) to resume their peace negotiations to address and resolve the roots of the armed conflict, even as it noted that the landmark Comprehensive Agreement on Respect for Human Rights and International Humanitarian Law (CARHRIHL) marked its 14th anniversary while the Bureau was in session. The Bureau was informed that the CARHRIHL conforms to international legal principles and standards that the IADL stands for and in fact contains provisions on the foregoing issues contained in the IADL Resolution.

In a related vein, the IADL affirmed its full support to its officers and members who make up in their individual capacities the majority of the International Legal Advisory Team (ILAT) to the NDFP Negotiating Panel. The ILAT gives its advice and opinion pro bono on matters of international law related or coming out of the peace negotiations.

The National Union of Peoples’ Lawyers (NUPL), the affiliate of the IADL in the Philippines and which represents the families of the disappeared university students and several other victims of human rights violations, was represented by its Secretary General in the Bureau meeting

Posted by Unknown at 8:21 AM No comments: