BOCAUE, Bulacan—While he did not publicly spoke, President Benigno Aquino III was elated with the early completion of two majors infrastructure projects in Bulacan where the government saved at least P163-Million.

This came as the President led the inaugural drive thru at the 14-kilometer Plaridel-Bustos arterial by-pass road project and the Bocaue bridge on March 1 before joining Liberal Party (LP) senatorial candidates in a sortie in Pampanga yesterday.

It was also noticeable that no LP senatorial candidates joined the President in Bulacan, however, he was greeted by local party mates and supporters in the ceremonial inauguration of the said projects.

During the project brief at the Bocaue bridge, the President was visibly elated when Public Works Secretary Alfredo Tolentino reported that the government saved P163-Million on the Plaridel-Bustos arterial road bypass.

For the Bocaue Bridge rehabilitation and expansion project, the government.saved about P4-M.

Both projects, Tolentino said were completed ahead of schedule, emphasizing that the Plaridel-Bustos by-pass was completed three months ahead of its target completion.

The report was well received by the President as he even led local official in giving an applause to Tolentino’s presentation.

Tolentino also disclosed that phase 2 of the Plaridel bypass road will be bidded on March 5.

The said project included a 1.5-kilometer bridge that will span the Angat River and will extend the bypass to Barangay Maasim in San Rafael town.

Tolentino said that the phase 2 of the project includes package 3 and four with a combined length of more than 10-kilometers.

As a possible impact, he said that it will reduce traffic congestion along the busy Cagayan Valley Road by 40 percent.

The project will also reduced travel time of northeastern Bulacan and Central Luzon travelers to metro Manila by at least one hour and half.

For his part, Governor Wilhelmino Alvarado said the completion of the Plaridel-bypass road opened new frontiers for development in the province.

He said that more land developers and other investors are eyeing Plaridel, Bustos and San Rafael towns.

This was affirmed by Mayor Arnel Mendoza of Bustos town.

Mendoza said that at least for new gas station opened in his town since the completion of the Plaridel Bypass road last November, while more residential subdivisions are being planned.

The Mayor said that they are now revising their comprehensive land us plan to open new areas for development in his town while preserving their agricultural lands. Dino Balabo
Posted by Unknown at 11:56 AM No comments:


MALOLOS CITY—A former cargador in Divisoria who transformed his town into a first class municipality, and a Business Administration graduate who turned Lugaw Republic into a booming franchise led the 2012 Most Outstanding Bulacan Businessman (MOBB) awards.

Eight others were feted in the awards given by the Bulacan Chamber of Commerce and Industry (BCCI) at the Hiyas ng Bulacan Convention Center here on Tuesday night, February 26. 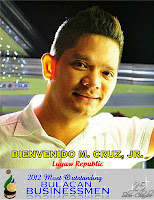 “All of them are champions, they are now only successful, they are leading, empowering and inspiring,” Simbulan said noting humble beginnings of the awardees.

She said that as a high school and college student, former Mayor Cruz worked as a cargador in Divisoria where his late mother maintained a store to sustain her 10 children. 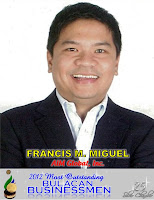 After graduating from the University of the East, Cruz worked as an assistance chief accountant, then moved to Pilipinas Shell Petroleum Corporation in 1971 where he later became a district manager.

Ten years later, Cruz resigned from Shell and established his own company and returned to Guiguinto, his hometown; and was elected mayor in 1998.

Cruz’s election started the transformation of the town from a fourth class to a first class municipality. 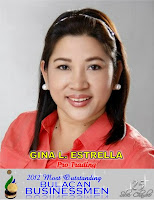 But even before he entered politics, Cruz acquired a 100 hectare property in Barangay Sta. Rita in 1992 and turned it to a first class subdivision with resort and hotel.

For his part, Bienvenido started investing on a franchise in 2005 after working abroad for seven years.

After a year in the franchise system, Bienvenido decided to establish his own franchise and called it the “Lugaw Republic,” which is now know as the “Pambansang  Lugaw” and was given the  Most Outstanding Food Franchise during the 2011 Top Brand awards. 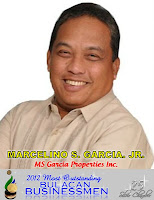 Lugaw Republic now have 128 outlets in Luzon, 12 of which are managed by Bienvenido’s family.

She said that Miguel completed his Computer Engineering course from Adamson University and has worked with telecommunications giants in the country, but in 2005, he started working on multi-level marketing. 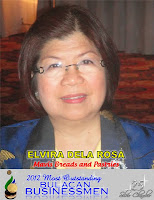 On the other hands, Garcia tried sending Filipinos to work abroad after the success of his liquefied petroleum gas business.

But the good heart in him bled when real life dramas of his recruited Overseas Filipino Workers in Lebanon unfold before his eyes.

He also learned the social costs of being a parent away from children, and decided to fold up operations of his recruitment agency. 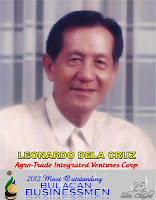 In 2004, Garcia consolidated his assets and invested in four Mini-Stop branches in the province, while expanding his LPG distribution business. 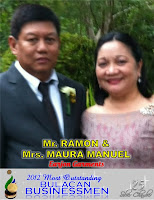 Equally dramatic is the life Estrella whose father died when she was five and live with her mother who cannot read or write.

She struggled to finish college and went to work to Taiwan with her boyfriend.

Years  later they established their cellphone business in Greenhills but was robbed twice.

Estrella returned to her hometown in Balagtas and started her merchandising business. 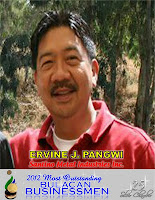 According to Simbulan, Estrella’s life story and entrepreneurial skills is fit for a tele-serye.

So are the lives of Leonardo Cruz Jr., who formulated Hagibis EF a popular brand with cockfighting aficionados, Elvira Dela Rosa of Mavis Bakery, Ervine Pangwi of Santino Metal Industries,  and Ramon and Maura Manuel of Earjon Garments which directly exporting products to Canada and the United States.  Dino Balabo
Posted by Unknown at 11:20 AM No comments:

No time for Facebook, Comelec urges reporting of violations

MALOLOS CITY—While the Commission on Elections (Comelec) encouraged use of social media to address violations of election laws, the provincial elections supervisor here said they have no time for Facebook.

However, they encourage voters and community journalists to report violations through Radyo Bulacan, a local radio station based in this city.

Lawyer Elmo Duque, the provincial election supervisor of Bulacan said they can’t open a Facebook or Twitter account, two of the most popular social networking sites.

He said,” we no longer have time for Facebook” noting that they cannot also open a social networking account for their office where voters can report violations of election laws. 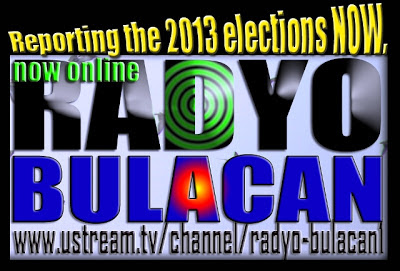 According to Duque, elections officers in the province are now busy preparing for massive voters education campaign.

He said it was meant to accomplish goals for credible, honest, accurate and meaningful elections.

“We will respond to complaints reported through Radyo Bulacan accordingly,” he said but noted that complaints must be properly documented.

When asked on possible punishment for violators, Duque explained that it will be processed and heard by the Comelec Law department.

He said that complaints may not result to disqualification citing that it requires criminal charges and conviction.

“we are still on corrective mode, we will always call the attention of violators in case of complaints,” Duque said.

Last week, illegally placed campaign posters in Malolos City of Bro. Eddie Villanueva, a senatorial candidate of the Bangon Pilipinas Party were removed along with posters of Alay-Buhay Partylist in Hagonoy town.

This came after the Duque received complaints from local residents and ordered the removal of the said illegally placed campaign posters.

“I had a conference with the leading supporters of Bro. Eddie in Bulacan and told them about the complaint,” Duque said.

With regards to posters of Alay-Buhay party-list, he said that the election officer of Hagonoy town was tasked to order the removal of posters on tricycle terminals. 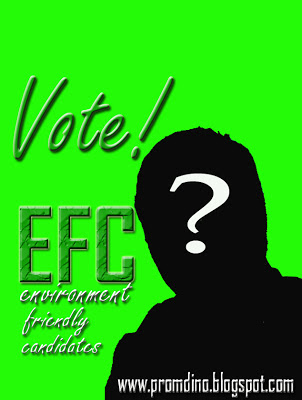 The photos were sent to Mabuhay, a local weekly newspaper which maintains a Facebook fan page, and were reposted later.

The posting was in response to encouragement of Commissioner Grace Padaca who visited the province last December.

In an interview, Padaca said that social networking sites can be used by voters to report election violations by posting photos and videos.  Dino Balabo
Posted by Unknown at 10:14 AM No comments:

This came as three journalists of the Al-Jazeera including a Filipina covering the said stand-off were detained and interrogated by Malaysian authorities.

One, make public the boundaries of the “no-go security zone” in the affected area to ensure civilians and media do not endanger their lives by breaching the limits.

Two, hold periodic press conferences to update the media on the “political negotiations” which are taking place to ensure media (and therefore public) official access to information around this public interest issue. This move will also allay the fear and uncertainty among people in the area and address the rumors abound in Malaysia regarding the “political negotiations/standoff” in Lahad Datu.

For medium term, the journalists groups also urged “the setting up a committee comprising of the authorities, journalists, editors, journalist union, media advocacy groups, human rights organizations and other civil society groups, to draw up a "standard operating procedure" on how security authorities should deal with the media during conflict situations, using UNESCO guidelines as the benchmark.”

The groups said they understand the national security concerns as a result of the armed standoff, however, they expressed alarm over the length of detention of the three journalists  and the secrecy surrounding the identity of the interrogating officers to be unnecessary given that the ones being questioned were not criminal suspects but journalists on duty and identifiable as such.

The statement added “we view the vague restrictions imposed on journalists covering the Lahad Datu “political negotiation/standoff” as an attempt at limiting journalists’ access at providing accurate, timely and fair coverage of a public interest security issue, especially given the looming elections in Malaysia.”

They stressed that “it is even more important for the media to have adequate and safe access to be able to report on the situation accurately, given the impact on diplomatic relations between Philippines and Malaysia.”

On February 19, the three person news team of Al-Jazeera arrived in Sabah to report the “standoff“ between an armed group calling itself the “Royal Sulu Sultanate Army” and the Malaysian authorities which started on February 14.

The journalists were placed under the detention of Malaysian authorities for at least six hours, during which they were intercepted at sea off Tanjung Labian village, escorted to a local police station, transferred to another police station 30 minutes’ drive away while under armed escort, and questioned by the Malaysian Special Branch, before being released.

Citing statement issued by Al-Jazeera on February 22 and eyewitness accounts, the CMRF said that “the three were questioned for 30 minutes to two and half hours each, sometimes together but also separately. Alindogan, a Filipina attached to the Al Jazeera English Network office in Kuala Lumpur, Malaysia, was questioned the longest at 2 1/2 hours, and was accused several times of working for the Royal Sulu Sultanate Army, despite showing the authorities her employee ID.”

While the journalists were treated politely throughout the whole detention period, the statement said that “interrogating officers were not in uniform and when asked, declined to provide their full names or rank.”

They also noted that as journalists attached to international media organizations,  Chao, Alindongan and Giddens, are equipped and trained to provide coverage during wars, standoffs, riots, uprisings and other hostile environments.

The statement also said the Malaysian authorities claimed that the security zone around the standoff area was off-limit to civilians and media to avoid “disrupt(ing) political negotiations” with the “Royal Sulu Sultanate Army” and that this was a “sensitive political situation”.

It further said, “the Malaysian authorities also said they were not allowed to specify the boundaries of the “no-go security zone” but acknowledged that when intercepted, the boat with the journalists on board was far from the “no-go security zone” and that the journalists had not broken any laws.” Dino Balabo
Posted by Unknown at 9:34 AM No comments: