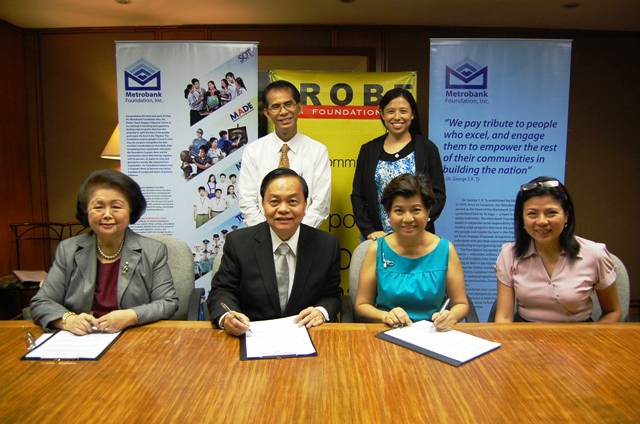 SHAPING THE NATION THROUGH POWERFUL STORIES.  True to its tradition of recognizing excellence and in celebration of its 50th year, the Metrobank Foundation Inc. (MBFI) will once again award the best journalists from print, broadcast and online media for 2012.  Via the signing of a memorandum of agreement for the Journalists of the Year (JOY) Awards, the MBFI  has partnered with the Probe Media Foundation Inc. (PMFI) to administer the awards program  that will include nomination, screening and judging a journalist's body of work for the last five years. "Metrobank has always been exposed in the sectors that are concerned with development.  The media for one, have been very helpful,"  says Aniceto M. Sobrepeña, President of MBFI.  In November 2001, Sheila Coronel, Dean Armando Malay and Jessica Soho became the first batch of awardees.  In the photo are: MBFI Executive Vice President Elvira Ong Chan, MBFI President Aniceto M. Sobrepeña, PMFI Founder and Trustee Cheche Lazaro, PMFI Vice President Twink Macaraig; (standing) MBFI Executive Director Nicanor L. Torres, Jr. and PMFI Executive Director Yasmin Mapua-Tang.
Posted by Unknown at 10:37 PM No comments: