This was how a resident of the coastal village of Pugad here described the fury of storm surge spawned by typhoon Glenda when it traversed the Manila Bay on July 16 en route to the West Philippine Sea.

In total, no less than 60 houses in the said villages were totally damaged as seven feet storm surge came rushing in.

Joey Gregorio, 44, of the said village narrated to PromdiNEWS how their house crumbled on the fury of storm surge.

Their ancestral house was built by his parents 60 years ago.

The said houses which used to stand side by side were all made of concrete hollow blocks.

Now, only piles of debris were left in place and the concrete comfort room of his brother’s house.

In the nearby village of Tibaguin, Yolanda Geronimo burst into tears as she recounted how her three year old house gave in to the fury of storm surge.

Geronimo said their house was constructed less than three years ago.

It was actually a replacement to their former house destroyed by similar storm surge at the height of the onslaught of typhoon Quiel in 2011.

“Dalawang sunod na po iyan mula noong Quiel,” she said as she tried to hold back the tears.

While lamenting the loss of their houses, both the Gregorios and the Geronimos where thankful that no one in their families and in their villages died during the typhoon.

But they also stressed that storm surges not hit their villages because municipal fishpond that used to protect them was damaged.

This was affirmed by Councilmen Gilbert Tamayo and Alfredo Lunes of Barangay Pugad.

They said that since the dikes of the over 200 hectare municipal fishpond beside the two villages were washed out six years ago, they are now fearing for their lives every time there is a typhoon.

For his part, Mayor Raulito Manlapaz said they will start rehabilitating the municipal fishpond by December.

His group’s arrival cam just when PromdiNEWS was about to leave Barangay Pugad.

According to Manlapaz, they are now preparing fund for the rehabilitation.

But he stressed that rehabilitation will be quicker if the provincial government will loan them its large dredging machine.

As a former fishpond operators, Manlapaz said that they will need all the assistance they can get to rehabilitate the 13-kiloment coastline of this town and protect its aquaculture industry along with the two coastal villages. Dino Balabo

Speaking at the jampacked 55,000-seater Philippine Arena, the President marvelled at “biggest domed arena in the world,” as a symbol that the Filipinos can compete in the world.

The President also said that the giant structure is a symbol of victories that the INC achieved in its first 100 years, adding that the world is now looking up to the INC as it continues to expand while taking care of its members.

He also expressed personal support to the INC and cited its continued spiritual leadership to its members as he thanked the religious organization for supporting him.

Before he ended his speech, the President also cited Bible verses from the Gospels of John and Matthew, noting how Jesus Christ reminded his apostles to love one another as He loved them.

The President took potshots against his detractors and encouraged them to sow “seeds of hope instead of disunity.” 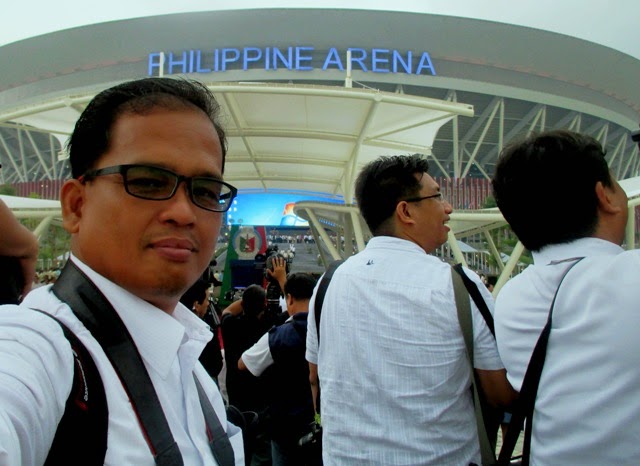 Located at the sprawling 70-hectare Ciudad de Victoria complex at Barangay Duhat here, the Philippine Arena which was built at the cost of $200 million is said to be earthquake-proof and can withstand super typhoon winds.

The INC said that its designed is inspired by the narra and banyan trees and has a dome spanning over 3.6 hectares. Its 55,000 seating capacity made it the biggest domed arena in the world, larger than the O2 Arena in London.

Construction of the Philippine Arena started in September 2011 and it can be seen on the east side of the North Luzon Expressway in this town.  Dino Balabo
Posted by Unknown at 9:51 PM No comments: