Nominations for search for Journalists of the Year extended 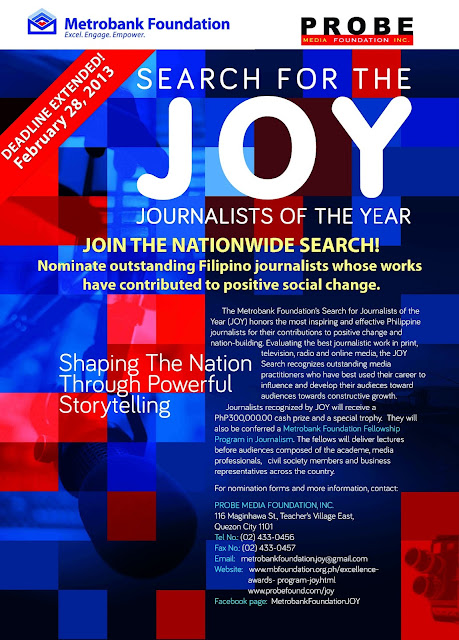 In a recently held orientation session for the nationwide Search for Journalists of the Year (JOY) attended by media practitioners, the Metrobank Foundation, Inc. (MBFI) and the Probe Media Foundation, Inc. (PMFI) announced the extension of the deadline for submission of nominations until February 28, 2013.

"The search is a fitting tribute to our Filipino press people on or behind the camera.  It is about time that we recognize their vigilance translated into powerful storytelling that contributed to nation-building and an informed citizenry," said MBFI president Aniceto Sobrepeña.

While PMFI founder Cecilia ‘Che Che’ Lazaro expressed that “As journalists, we value our reputation based on what we write and report. More than the fame, what is important to us, as journalists, is that the stories we tell have created positive impact among the people we serve.  I am happy that JOY winners have the opportunity to share their expertise through the conduct of the lectures.”

Qualified for this search are Filipino media practitioners currently residing in the Philippines. They must have been working in the media industry for at least ten (10) years covering the period from January 1, 2002 to December 31, 2012 and must be practicing any medium (print, radio, television or online) of journalism in the Philippines on a regular basis and as a primary source of income.
Nominations are open to everyone of legal age. Self‐nominations are also allowed.  Nominees may be endorsed by their current supervisor, superior or editor, provided that the endorser is attached to a bona fide media organization or news agency.

The three winners will each receive PhP300,000 and a special trophy. They will also be conferred the Metrobank Foundation Fellow in Journalism where they will have the privilege to share their expertise and experience through the conduct of professorial lectures before an identified audience in select academic venues.The program will highlight the journalists’ contributions to both the industry and to society, and give the public a chance to learn from these noteworthy individuals.

The JOY celebrates and honors distinctive Filipino journalists from print, broadcast and online media for their body of work that has contributed to the development of the nation and inspired other media practitioners.  It also encourages responsibility, accountability and excellence in storytelling.  It intends to recognize outstanding mature journalist sometime during his or her prime as viewed in the context of the whole landscape of the journalism profession.  Journalism would be viewed as a life as well as a primary source of livelihood, not just a craft, vocation or career.

For further inquiries, please visit www.mbfoundation.org.ph. or www.probefound.com. or call the Probe Media Foundation Secretariat at telephone number (02) 433-0456 or e-mail: metrobankfoundation.joy@gmail.com.
Posted by Unknown at 10:39 AM No comments: 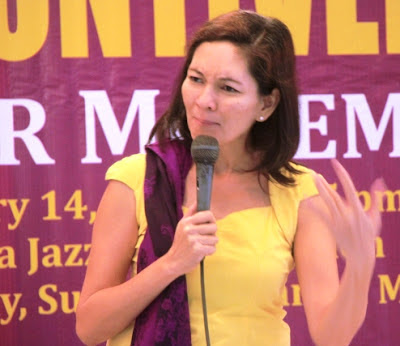 MALOLOS CITY—Malacanang ally and former Akbayan partylist Rep. Risa Hontiveros has called for a “strike down of three poisonous provisions” of the controversial Anti-Cybercrime Law.

The three provisions that must be removed, Hontiveros said, are the cyber libel clause, real time data monitoring, and the take down clause.

Speaking to journalists during the launch of the Risa Hontiveros for Senator Movement here on Monday afternoon, the former militant partylist representative described the three provisions as “unconstitutional.”

She explained that even the President is willing to decriminalize libel law as stated in Article 353 of the over-80-year-old Revised Penal Code, and yet, penalties for internet libel are increased in the Republic Act 10175 or the Anti-Cybercrime Law.

Hontiveros said that real time monitoring and take down clauses of RA10175 are unconstitutional because they require no court order for implementation.

“It runs counter to thet freedom of expression and of the press as guaranteed in the 1987 Constitution,” she said in the vernacular.

As a former legislator, Hontiveros said that before RA 10175 was passed into law, the Freedom of Information (FOI) Bill should have been passed first.

She said that the FOI could have served as a magna carta or mother framework for all other laws with regards to the media.

“They should have passed the FOI Bill first and it could have repealed the antiquated libel laws,” she said.

Hontiveros also expressed optimism on the possibilities that the FOI Bill will still be passed before the end of the 15th Congress.

“It can still be passed, otherwise, it will be refiled in the 16th Congress,” she said.

Earlier, the Philippine Press Institute (PPI), the national association of newspapers in the country issued a pooled editorial demanding the passage of the long delayed FOI Bill.

“Quick and correct action. This is the best and justly deserved path for the House of Representatives to take on the Freedom of Information (FOI) bill,” the PPI said in the pooled editorial issued on Monday.

They added that that “Slow and wrong. This is the worst and justly reasonable judgment that Filipino voters would have of the House members, most especially of those seeking re-election in May 2013, should the FOI fail to pass.”

The pooled editorial further said, “time, the dribble drivel in the House, and an Executive seemingly less than lame in his support for the bill – the odds seem stacked against the passage of the FOI bill in the 15th Congress. This is even as the Senate had passed its version of the bill on third and final reading before Christmas last.”

As the 15th Congress draws to a close, the PPI said, “Only nine session days remain from January 21, when lawmakers return to work after a month-long holiday break, to Feb. 6, 2013, after which lawmakers will have another extended break and plunge into election campaign mode.

They will have just three more session days in June intended mainly for closing ceremonies, before adjourning sine die to give way to the incoming 16th Congress on June 30, 2013.”

They warned that that failure by the incumbent House to pass the FOI up to third reading is certain death for the bill in the 15th Congress.

This means that legislative work on the bill will revert to step one yet again in the 16th Congress. (Dino Balabo)
Posted by Unknown at 8:33 AM No comments: 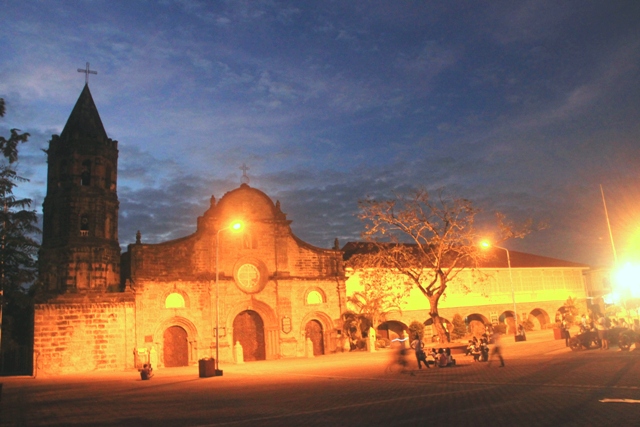 MALOLOS CITY, Bulacan,  — Provincial and city officials are now sprucing up the compound of the historic Barasoain church in preparation for the commemoration of the 114th anniversary of the First Philippine Republic on Wednesday, January 23.

Former Senator Ramon Magsaysay will represent President Benigno S. Aquino as the guest of honor and speaker. The former senator will be joined by provincial officials headed by Gov. Wilhelmino M. Sy-Alvarado and Vice Gov. Daniel Fernando in paying tribute to Gen. Emilio A. Aguinaldo, president of the First Philippine Republic

The governor said that this year’s celebration will be highlighted by a parade dubbed as “Parada ng Republika”, a parade that will be joined by the eight governors of the provinces representing  the eight rays of the sun in the Philippine flag.

“This will be the first time that leaders of the eight provinces that broke from Spanish colonial rule will be present in marking the anniversary of the First Philippine Republic. Their presence will add more significance and boost unity among us in preserving one of the most important events in Philippine history,” Alvarado said.

National Historical Commission of the Philippines Executive Director Ludovico Badoy said that the program will start at 8 o’clock in the morning through the arrival of military honors for the president followed by flag raising ceremony and wreathe laying activity in Gen. Emilio Aguinaldo’s monument.

“We want to uplift the awareness of our fellow Filipinos especially the young generation that this is a very significant part of the history. It is not only to promote Malolos, not only for Bulacan but for the entire country as well,” said Badoy.

He added that they will be putting flags and tarpaulins along Roxas Boulevard to inform Filipinos to join the celebration.

President Aquino has declared January 23 a special (non-working) day in Bulacan in commemoration of the First Philippine Republic (also known as the Malolos Republic).
The Chief Executive issued the declaration to give the people of Bulacan the full opportunity to celebrate and participate in the occasion with appropriate ceremonies.
On June 12, 1898, the Philippine independence was proclaimed and The Act of Declaration of Philippine Independence was read at the Emilio Aguinaldo's ancestral home in Cavite.
After gaining the independence, the Malolos Congress convened on Sept 15, 1898 and produced the Malolos Constitution.

On Jan 23, 1899, the First Philippine Republic (also known as the Malolos Republic) was inaugurated at the Barasoain Church in Malolos, Bulacan.

The establishment of the Philippine Republic was the culmination of the Philippine Revolution against Spanish rule. On June 12, 1898, at Aguinaldo's ancestral home in Cavite, Philippine independence was proclaimed and The Act of Declaration of Philippine Independence was read. The act had been prepared and written in Spanish by Ambrosio Rianzares Bautista, who also read its proclamation. The Malolos Congress convened on 15 September, and produced the Malolos Constitution. That constitution was proclaimed on 22 January 1899, transforming the government into what is known today as the First Philippine Republic, with Aguinaldo as its president. In the meantime, on December 10, 1898, the Treaty of Paris had been signed, ending the Spanish-American War. Article 3 of the treaty transferred the Philippines from Spain to the United States.—EMIL G. GAMOS
Posted by Unknown at 8:31 AM No comments: