—Families living along river banks will be relocated with the impending implementation of massive flood control project in .

“Dislocation will be addressed, may mga resettlement components na kasama yung flood control project sa ,” he said noting that it will cover the provinces of Nueva Ecija, Tarlac, Pampanga and Bulacan.

He said that the first part of the flood control project is to remove obstruction along water ways and river banks.

“May requirement sa batas na dapat may easement, this has not been respected, we have to start imposing the restriction, dahil sila din mapipinsala pag bumabaha,” Singson said.

Among those that are likely to be affected are residents of Hagonoy, Paombong and Calumpit towns in Bulacan who are living along the man-made Labangan Channel dug in the 70s.

Residents of the said towns, especially in Calumpit, are worried on the impending resurrection of the phase II of the Pampanga Delta Development Project (PDDP-II) which was stalled in the early 90s when it was opposed by Bulakenyos.

The Phase I of the PDDP was completed in the late 80s after the Department of Public Works and Highways (DPWH) dredged fishponds on both sides of the from Apalit town to the .

However, Singson said that the flood control masterplan not only include construction of dikes and embankment, but water resource management as well.

As the appointed “water czar” by the President, Singson explained that only 20 percent of total rainfall in the country annually is being utilized.

“Nakakalungkot, 28 percent lang ang nagagamit ng ating ulan, and the rest either cause problems like loss of lives and property, or natatapon sa mga ilog at oceans at di na napapakinabangan,” he said.

The secretary stressed that despite getting abundant rainfall all throughout the year, there are parts of the country that suffers from shortage of water for irrigation due to lack of integrated water management.

This means that the proposed filtration system along the in Bulacan will be integrated in the whole flood control master plan.

According to Antonio Nangel, administrator of the National Irrigation Administration (NIA), the establishment of a series of filtration system along the will address looming groundwater shortage.

He said that water from the river can be pumped into reservoirs that will be constructed, then, filtered before distributing it to household through local water district’s pipelines.

Nangel added that that the proposed water filtration system will also address perennial flooding in Bulacan.

Singson affirmed that Nangel’s proposal will be considered in the proposed flood control masterplan which also include a flood warning and forecasting system.

He said that the Department of Science and Technology (DOST) along with allied agency, the Philippine Atmospheric Geophysical Astronomical Services Administration and the Department of Transportation and Communications is rolling out a flood modeling, forecasting and warning system.

The system will be implemented in 18 river basins in the country which straddles 33 provinces.

Singson said that through the system, they will be able to warn residents living along the river banks six hours before the flood.
Posted by Unknown at 10:40 PM No comments: 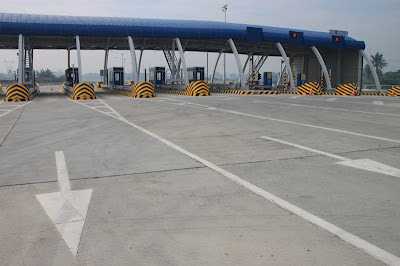 – The Department of Public Works and Highways (DPWH) bared a network of infrastructure master plan for further extending reaches of existing roads.

The plans which are expected to be implemented next year following the Aquino administration’s underspending on infrastructure projects last year include massive flood control project in Central Luzon and the P12-billion infrastructure master plan to support the country’s tourism industry.

“Nakalinya na rin through the guidance and funding ng JICA ang Central Luzon Link Expressway (CLLEx),” Singson said referring to the 63.9 kilometers expressway that will be funded by the Japan International Cooperation Agency.

The CLLEX will branch out at , Tarlac section of the Tarlac-Pangasinan-La Union Expressway (TPLEx) and will link to cities of and in Nueva Ecija.

Singson added that while CLLEx is waiting to be implemented, the DPWH is now working on the design for the alternate road for faster and safer travel to the .

He said that providing an alternate road to Nueva Vizcaya will further boost its economic development.

Singson said that the new alternate route to Nueva Vizcaya will include boring tunnels in the mountains.

Along with this project, he disclosed plans to pursue implementation of the highway to the on the country’s eastern seaboard.

“Hopefully, maumpisahan na rin ang papuntang , we are completing the ,” he said.

With regards to the TPLEx, the secretary said its two lanes up to in Tarlac will be completed this year.
He also said the DPWH already told the proponent of the TPLEx to submit a proposal to convert it into a four lane highway.

With regards to infrastructure development that will support the tourism industry, Singson disclosed that he met with tourism officials early this week.

He said they discussed a P12-billion tourism infrastructure support master plan that will be implemented next year.(Dino Balabo)
Posted by Unknown at 10:36 PM No comments: