Trip to island village of Pugad 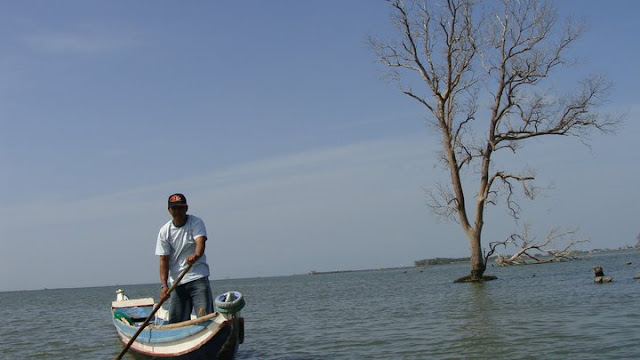 It was a cloudy Sunday morning, the sun is hardly up, but i was already at the old Hagonoy Public market where the passenger boat for the coastal is anchored.
The boat can fit 60 persons and supposed to leave by 7AM, but 30 minutes before, it was almost full.  The pilot and his two men were busy loading cargoes of their passengers on the boat.

I asked the guy on the steps, and he confirmed that its the first trip for Pugad, which at least one hour boat ride from the Hagonoy town proper.

I stepped on the boat and found an empty seat in front, just behind the cargoes.  I thought it was a good seat. I can shoot a lot of photos along the way and see a different perspective of how people on riverside and coastal communities lives.

But my excitement was coupled with some concerns as more people and cargoes came. The pilot said they will fit, but some older passengers expressed concern that we may capsize along the way.  Some even cited their sad experience.

I didnt say anything.  I just listened to them.  One even teased a gay passenger saying "ikaw lang ang bumigay sa Pugad." I secretly smiled knowing that an island village is a close knit community, each one knows another, eve in the boat, and Im the odd man.

I was born and raised in the coastal town of , and as journalist I have travel almost all places in my home , but this trip was my first to Pugad, one of the two coastal villages of Hagonoy.

As the engine of the boat roared away from the river bank, I mind wondered what will I see in the next three hours.
Posted by Unknown at 11:35 PM No comments:

MALOLOS CITY—With rising crime incidence, the mayor of this town assured security of Bishop Giuseppe Pinto, the papal nuncio to the Philippines who will visit the province on March 10.

Pinto will be in this city along with 46 bishops in the country on the said day for the opening of the year-long 50th Jubilee celebrations of the Diocese of Malolos.

“We want to secure the visit of the papal nuncio and other guests in the Jubilee celebrations,” Natividad said noting that installation will be completed by end of March.

However, he said they prioritized installation of high definition CCTV camera’s along the MacArthur Highway from Guiguinto town to this city and along Paseo Del Congreso that leads to the Basilica Minore in the city’s downtown where main celebrations will be held.

“I asked PLDT to fast track installation along the MacArthur highway so that we can monitor movements in real time,” the mayor said.

The new high definition CCTV cameras will be added to similar equipment installed about two years ago.

Natividad added that they will field addition police officers along with quick response teams in case of trouble.

He said that at present, there are only 71 police officers guarding over 240,000 residents of this city.

Aside from the above preparations, Natividad also asked local citizens for vigilance to avert increasing crime incidence in the city.

The incident came tow days after four men robbed Pamana Cooperative in Matimbo followed by a stabbing at the Marcelo H. De Pilar National High School where a junior student was killed by a school mate.

On January 25, a businesswoman from Paombong town was killed in broad daylight near the provincial capitol compound here.  It was followed by the post Valentines Day murder of Crisanto Tolentino, a employee in the city’s vice mayor’s office.

Earlier, Bishop Jose Francisco Oliveros announced that Pinto along with bishops from 45 other dioceses in the country will join the 50thjubilee celebrations of the Diocese of Malolos on March 10.

He said that Pinto will lead the canonical coronation of the image of the Virgen Inmaculada Concepcion de Malolos.

Oliveros said that thousands others, including priests, nuns, high government officials, and parishioners will be present at the celebration. (Dino Balabo)
Posted by Unknown at 9:26 AM No comments:

This came after local residents, including businessmen expressed alarm over the rash of violent crimes in the province since the last week of January.

The crimes includes the killing of a businesswoman in Paombong town, kidnapping of a family in Meycauayan City, assassination attempt on a mayors aspirant in San Miguel town that resulted to the death of his two companions, robbery at Resureccion Panswhop in Balagtas town and at Pamana Cooperative in Malolos City.

Other crimes include killing of a lawyer in San Jose Del Monte City; a police officer in San Rafael town, and an employee at the Vice Mayor’s office of Malolos City.

Alvarado said that the Bulacan Provincial Police Office reported to him that crime incidents in the province is lower compared to the first two months of last year.

However, he said that crime solution efficiency is low.

The governor also noted that while a number of crimes committed in the province remain unresolved, many were committed with boldness.

He cited that the killing of the businesswoman from Paombong, along with the killing od a lawyer in the City of San Jose Del Monte, thre kidnapping and carjacking in Meycauayan City and the robbery at Pamana Cooperative were committed on broad day light.

“It must be stopped,” he said noting that a number of Bulakenyos approached him and expressed their fears on increasing criminality in the province.

A former lawmaker and vice governor of Bulacan, Alvarado was elected in the 2010 elections.

After his assumption to office, he vowed “to put the house in order” noting that good governance will result to peace and order then to more investments in the province that will generate jobs.

However, the Bulacan Chamber of Commerce and industry said that high crime rate in the province will not only discourage possible investors, but current businessmen from expanding their operations
Posted by Unknown at 8:29 AM No comments:

MALOLOS CITY—British Ambassador to the Philippines Stephen Lillie cited on Wednesday, February 29, Bulacan’s role in boosting the image of the Philippines as one of the fast growing economies in Southeast Asia.

“Your great province has so many things to offer. It is a well situated place for investments and there are lots of job opportunities,” Ambassador Lillie said during his visit to the province.

Ambassador Lillie said he was invited by Gov. Alvarado to visit Bulacan and he was very thankful for the opportunity to visit the historic province.

He added that the invitation is one way of strengthening the ties between the United Kingdom and the province of Bulacan.

“In my two and a half years as the British Ambassador, I am deeply touched by the warm welcome of the Filipino people. Today, we share freedom and we look forward to increase trade and to a better relationship,” Lillie said in his brief message at the lunch reception hosted by the Provincial Government of Bulacan (PGB).

When asked what he can say about Bulacan, the British envoy said that it’s more fun to be in Bulacan, particularly in the historic city of Malolos which is known as the cradle of democracy in Asia.

“Despite thousands of miles between Great Britain and the Philippines, we still have many things in common—the language we speak and our Christian faith,” the ambassador added.

Meanwhile, Alvarado said during his welcome speech that the reunion of Bulacan and Britain is much different now compared to its first meeting 250 years ago.

“The world is different now; we have found it better and to our interest to explore all the possibilities that will make us former allies and enemies share a better, safer world. We are grasping each other’s hand, not in the spirit of animosity, but in the spirit of brotherhood, friendship and cooperation,” said the governor.

Alvarado added that he hopes that the said meeting will serve as a recommitment between Great Britain and Bulacan to help one another in search of common solutions to the common problems and to share the same dreams.

Further, the top local chief executive said that there will be talks between the British embassy and the PGB about the youth exchange program so that young Bulakenyos will be able to go to the United Kingdom and learn their culture as well as their technologies.

“Actually the organization is the one who assigned us here and I’m much pleasured that they assigned me here in the Philippines. We are a group of dedicated youth volunteers who find solutions based on problems that we see in Bulacan particularly in Hagonoy like health issues (healthy lifestyle), and family planning,” Tilly Alcayna-Stevens, a member of the Global Exchange, British youth volunteer said.

The British ambassador later visited the historic Barasoain Church where he prayed, and the nearby Casa Real ruins in this historic capital city.
Posted by Unknown at 8:24 AM No comments:

MALOLOS CITY—February 29 is a rare day, but it was made more unusual with the birth of a triplet at the Bulacan Medical Center (BMC) on the same day.

Analyn was rushed to the BMC by her husband Philip, 27, on Wednesday morning.  Philip is a farmer.

The triplets were born via caesarian operation.

The triplets were named Simon, Sakira and Shiennie

While the birth of the triplets brought joy to the Santoses, the parents also expressed concern over the future of their triplets.

Philip said that they might have a hard time raising the triplets,along with their oldest child.

He said that his savings were almost depleted by his wife’s operation.

He also said they now need more medicine as his wife was diagnosed with Hepatitis B.

Doctors said that the mother might infect her babies with hepatitis B. (Dino Balabo)
Posted by Unknown at 8:22 AM No comments: