Bulakenyo car crash victim to be repatriated next week?

—Jeamelle Mangonon and her children were ready to go to to join her husband Joey.

That dream was wiped away when Joey along with three other overseas Filipino workers (OFWs) died in a road mishap on late Sunday night.

The news was devastating for Jeamelle that the only words she was able to utter in an interview on Wednesday was “please help us.”

Those words were directed to the Department of Foreign Affairs (DFA) as a request to hasten the repatriation of the bodies of the victims.

In another interview yesterday, Jeamelle repeated the same to Radyo Bulacan, but noted that Joey’s remains might be repatriated by next week.

“It might be next week, we don’t know yet, please help us,” she said in vernacular during a phone patch interview.

A resident of Barangay Bambang in Bocaue town, Jeamelle said she still do not know what to do.  She had four children with Joey.

Joey is a member of the housekeeping staff of the Coast Edmonton Plaza Hotel in .

On Sunday, Joey along with fellow hotel workers Anthony Castillon, Josefina Velarde, and another unidentified Filipina died in a mishap along the in Innisfail, some 120 kilometers north of .

Another Filipina identified as Josephine Tamondong suffered serious injuries and was rushed to .

The CBC News website said that Tyler James Stevens, the driver of the Range Rover that slammed to the victim’s Dogde Journey van is now facing multiple charges including impaired driving causing death.

It was also reported that some motorists along the were almost hit by Steven’s vehicle who was driving northbound on a the southbound lane.
Posted by Unknown at 9:14 AM No comments:


— It will be the greenest Olympics!

This was how British Ambassador to the Philippines Stephen Lillie described the 2012 London Olympics that will be held in July to August this year.

Lillies remarks came when asked by this writer in an ambush interview during his recent visit here.

He said that in construction of the Olympic Park in , the British government demanded the utilization of environment friendly technology.

This include the use of less concrete in the construction of structures and other facilities.

“We were able to reduce amount of energy in constructing the facilities through the utilization of advanced technology that reduce use of concrete,” he said.

Lillie also cited the over-all planning of the London Olympic Park which took into consideration accessibility to public transport.

He said that it was well-planned with the end goal of reducing greenhouse gas emission from private vehicles.

“Olympics is a great opportunity to bring people together around the world and we will show to them the greenest Olympics,” he said.

With regards to threats of terrorism like in the Montreal Olympics, Lillie made assurance that all participants and visitors will be safe.

He said, “terror is a fact of life, but we are fully prepared for it.”

The ambassador added that they have implemented comprehensive security arrangements to ensure a fair and enjoyable games.

With regards to Filipino Olympians, he said that he wish that they  win first Olympic gold medal in .

Lillie also noted that while the Olympics is more than four months away and no Filipino Olympian won the old medal yet; a Filipino graphic artist won design for the Olympic commemorative coin.

This is in person of Roderick Enriquez who came from Zambaonga, City.
Posted by Unknown at 8:55 AM No comments:


—British Ambassador to the Philippine Stephen Lillie is looking forward for increase trade and economic relations with Bulacan.

This came as global businessmen predicted that economic opportunity and potentials of the 21st century is in South East Asia, particularly in the .

“We look forward to strengthen our relations in with South East Asian countries, particularly the , and increase trade and economic relations in Bulacan,” Lillie said in a recent visit here.

The ambassador said that one of the areas that they are looking into is in the development of renewable energy.

He said, the country is a global leader in geothermal energy and has potentials for wind and biomas energy developments;  while Bulacan is one of the leading provinces in the country as far as hydropower generation is concern.

This is due to 246 megawatt Angat River Hydro Electric Power Plant (Arhepp) located in Norzagaray town.

“Bulacan has so much potentials and opportunities in renewable energy development. With more opportunities, I believe more British companies will come here,” he said.

“Its part of our plant to be less reliant on oil and gas and to have energy security,” the ambassador said.

He added that renewable energy is not only environment friendly, but a step towards combating impacts of climate change.

He cited the aftermath of typhoons Pedring and Quiel in the province last year nnotinf that climate change is increasing probability of similar severe weather conditions in the world.

He said that British businessmen are welcome in the province noting that there are few that has already established business in Bulacan. 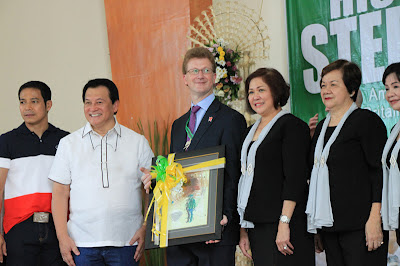 Alvarado also said that closer relations with will give opportunity for Bulakenyos to join cultural exchange program in the future.

At present, at least nine British students has been undergoing community immersion in Hagonoy town facilitated through the Global Exchange program.

More British students are expected to arrive in April in the City of San Jose del Monte under the British Global citizen program.
Posted by Unknown at 8:51 AM No comments: