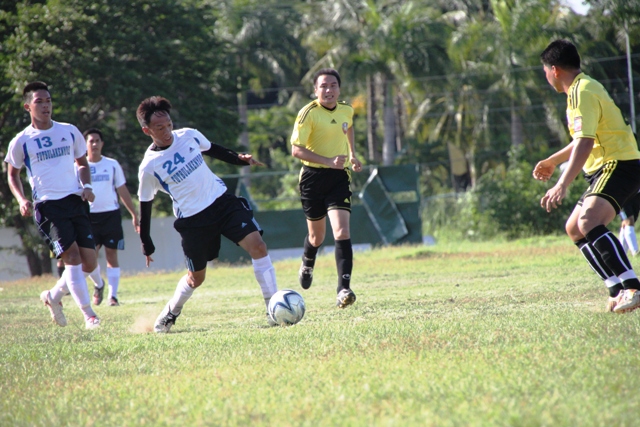 Emmanuel Robles, coach of the Futbulakenyos FC said the victory was bitter sweet as it was their first game at home, but hardly watched by Bulakenyos as football still have to gain popularity in the region.

Futbulakenyos first played in Tarlac and Pampanga where they defeated Lighthouse Amihan FC of , and Pampanga FC, respectively.  They now lead the CLFL with 3-0 win-loss card. 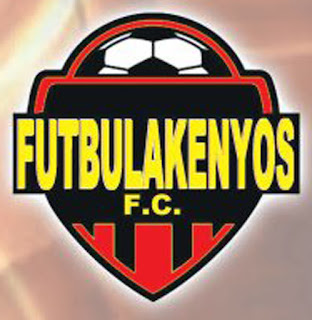 Composed of players from the , the Futbulakenyos dictated the tempo of the game in the first 45 minutes and scored two goals compared to Tarlac FC’s one.

In the second half, younger and faster Futbulakenyos further increased the aggression on the Tarlac FC’s goal that saw the ball hardly leaving the Tarlac FC’s half of the field.

Despite the aggressive attack, Bulacan players only made one goal in the second has as Tarlac FC’s goal keeper was able to deflect some, while other attempts missed the goals by only few inches.

“We need to train more and work on our plays,” said Robles who expressed satisfaction on his players’ stamina and agility as they out-run and out-play Tarlac FC players.

While only few watch the game, Futbulakenyos show some shining moments aside from scoring three goals. 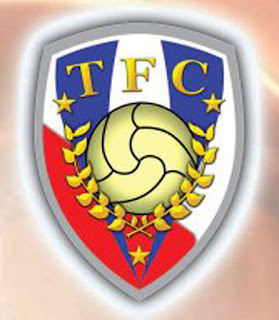 Organized last January, the CLFL opened its first season last May 20 with four competing teams from Bulacan, Pampanga, Tarlac and .

At present, Futbulakenyos leads the league with 3-0 win-loss card followed by Tarlac FC with 1-1; Lighthouse Amihan FC with 1-1; and Pampanga FC which lost its first three games.  (Dino Balabo)
Posted by Unknown at 11:28 PM No comments:

Leading independence rites at Barasoain, a homecoming for PNoy 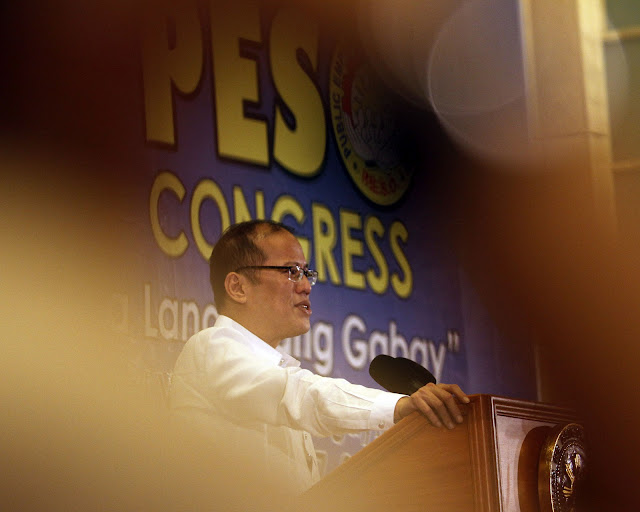 —Officials assured a simple but dignified and solemn celebration of the 114th Independence Day at the historic Barasoain church here on Tuesday.

It will be led by President Benigno Aquino III who will be accompanied by members of the cabinet, diplomatic corps candidates for the 2012 Miss World Philippines.

The celebration which will be led for the first here by the President of the Republic will also be marked with social services from national and local government.

“It will be very simple, solemn but dignified,” said Dr. Serena Diokno, the chairperson of the National Historical Commission of the Philippines (NHCP).

In a press conference held here on Friday afternoon, Diokno said that right after the arrival honors for the President at 8AM, an ecumenical prayer will be led by leaders from the Jesus Is Lord Church, Iglesia ni Cristo, , Muslim community, and the Catholic Church. But some officials who asked not to be named said that the President might also include gains of his recent visits  to the and the .

After delivering his message, Diokno said the President will rush back to Malacanang for the traditional “Vin d’ Honneur”, a cocktail reception for the members of the Diplomatic Corps.”

She added that while the “Vin d’ Honneur” is set by mid-morning on Tuesday, at least 20 members of the Diplomatic Corps have confirmed attendance at Barasoain.

Traditionally, Diokno said the President of the Republic lead celebration of the Independence Day at Luneta, while the Vice President leads in Kawit, ; and the senate President or the Speaker of the House lead in Barasoian.

But this has changed since former President Gloria Macapagal Arroyo led the same celebration in Cebu years ago, and President Aquino in last year.

For his part, Gov. Wilhelmino Alvarado said Independence Day celebrations at Barasoain is a homecoming for the President.

“Its about time, and it’s a homecoming for the President,”Alvarado said noting that Aquino’s ancestors started in before moving to Tarlac in late 1800s.

He also said that President’s family still maintain an ancestral house of the Cojuancos here, just a few meters away from the .

Alvarado added that independence day celebrations here will not end aft after the President depart for Malacang.

Dra. Jocelyn Gomez, head of the Provincial Public Health Office said that over 200 medical staffs from different hospitals in Bulacan and nearby provinces will lead in treated over 1,000 patients.

For her part, Leilanie Reynoso, the provincial director of the Department of Labor and Employment (DOLE) said 25 local companies have confirmed to joined the jobs fair which will open 2,000 more jobs.

Aside from the above, she said that companies offering jobs abroad will also join.

She said that similar activities will be held at the Quirino Grandstand in .  (Dino Balabo) 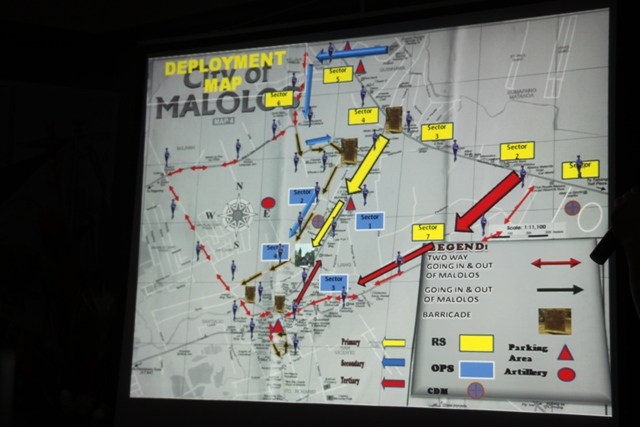 —Bulacan police will be on full alert status starting Monday in preparation for the 114th Independence Day celebrations at the historic that will be led by President Benigno Aquino III on Tuesday.

The celebrations, Governor Wilhelmino Alvarado said is a big boost for Bulacan tourism while highlighting the historical events that transpired here over a century ago.

Supt. Adriano Enong, the deputy provincial director for operations of the Bulacan Provincial Police Office (BPPO) said about 1,000 police officers and soldiers of the Armed Force of the will be deployed within this city.

He said that 450 police officers will be deployed for traffic control and possible crowd disturbance.

At least 150 member of the AFP Headquarters Batallion will secure President Benigno Aquino III’s arrival along with 200 members of the Presidential Security Group (PSG).

Enong said that 100 soldiers from the Army’s 56th Infantry Battalion will be deployed in key areas to secure outer perimeter. 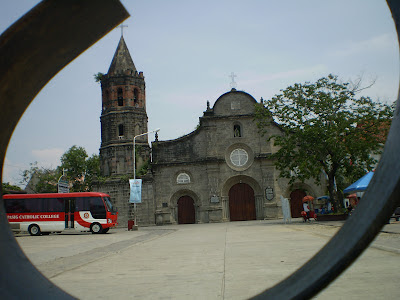 He also said that fire trucks and ambulanced will be on standby near Barasoain church and other strategic areas for immediate response for possible emergency. It will be directed by the Provincial Disaster Risk Reduction Management Office.

He said that the stretch of the from Tabang in Guiguinto town to Calumpit town will be closed for heavy vehicles except for busses starting Tuesday 6AM.

In similar manner, Paseo del Congreso, the main road that leads to from the will be closed for all vehicles from 6AM to about 10AM on Tuesday.

Enong advised drivers of heavy vehicles like cargo trucks to make a detour on the North Luzon Expressway (NLEX) to avoid the on Tuesday morning.

He explained that prohibition for cargo trucks was meant to declog traffic at the Malolos intersection here because the Malolos flyover remained under repai and non-passable to large vehicles.

The said flyover was closed to all vehicles on may 19, but was opened to light vehicles last week.

Alvarado said that the candidates were supposed to go to Ilocos Sur, but Governor Chavit Singsong cannot accommodate them until after the Independence Day Celebrations as he joined his friend Manny Pacquiao for the latter’s championship fight with Timothy Bradley Jr., at the MGM Arena in .

Alvarado also said that Tuesday’s celebration is a big opportunity to promote the province’s colorful history along with what transpired at over a century ago.

He said that without the Malolos Congress that convened at Barasoain Church on September 15, 1898, General Emilio Aguinaldo’s independence day celebration at Kawit , Cavite months before is meaningless.

He said that the Malolos Congress ratified the independence day declaration of Aguinaldo which was recognized by then international community.

“Malolos Congress also gave birth to our first Constitution and the first democratic republic in Asia and ,” Alvarado said.
Posted by Unknown at 11:17 PM No comments: 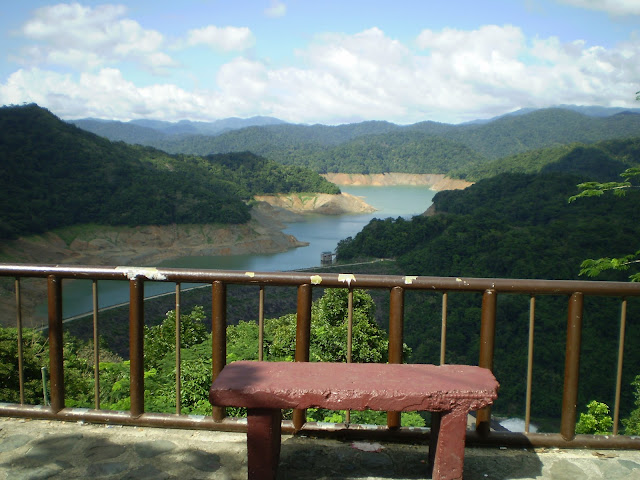 —Environmentalists demand better protection of the Angat Dam watershed as biodiversity hotspot after reports of sightings of Philippine Eagle in the area.

The call came after years of efforts to preserve the 63,000 hectare watershed which was focused on forest management for purposes of securing water supply for Metro Manila and power generation, but not on its rich biodiversity.

Brother Martin Francisco of the Sagip Sierra Madre Environmental Society (SSMES) said reported sightings of the Philippine eagle another compelling reason for the government to take a more serious program for the protection for the watershed.

“The Napocor used to claim that the Angat Watershed is the best kept watershed in , maybe that’s the reason why Philippine eagles are sighted, they maybe looking for sanctuary,” Francisco said.

However, despite its status,  the National Power Corporation (Napocor) and the Department of Environment and Natural Resources (DENR) earlier estimated at about 20 percent of the watershed is deforested due to rampant timber poaching.

“The sighting of eagles within the watershed means more reason for its protection,’ said Francisco.

Danilo Sevilla, the vice president of the National Power Corporation (Napocor) disclosed on Monday the many reported sightings of the Philippine Eagle within the watershed.

However, Sevilla said that they still have to confirm if the Philippine eagles sighted within the watershed are nesting.

Sevilla also said the watershed is home for native species of hardwood or dipterocarps and still undocumented rich flora and fauna.

He added that Angat watershed serves a the primary carbon sink of Metro Manila as it was able to siphoned an estimated 50-Million tons of carbon in the past years.

Emmanuel Umali, Napocor manager for the Angat Watershed said they are about to sign a memorandum of agreement (MOA) with the Haribon Foundation in order to conduct study for watershed bioviversity, including the Philippine eagle.

The same was echoed by Anabelle Fontillas of the Haribon Foundation who explained that they intend to validate anecdotal sightings on eagle population estimates.

She also said that the best way to protect the Philippine eagle is to preserved and conserve existing forests through broad support from stakeholders like local government units (LGUs) and schools.

For his part, Mendel Garcia, the head of the Angat Watershed Area Team (Awat) said that Napocor has also tried to work an agreement with the Philippine Eagle Foundation (PEF).

However, the said agreement didn’t work out for unknown reasons.(Dino Balabo)
Posted by Unknown at 11:09 PM No comments: